The Story of the Masters 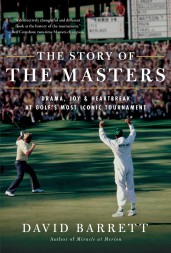 The Story of the Masters is the first comprehensive year-by-year history of the world’s most famous golf tournament. Veteran golf journalist David Barrett draws upon contemporaneous reporting and other source material to offer dramatic accounts of each year the tournament has been played, starting in 1934. The story of the tournament progresses from the early years when it was founded by golf great Bobby Jones and quickly established itself as an elite event, to the post-World War II era when Sam Snead and Ben Hogan dominated. The thrilling exploits of dashing hero Arnold Palmer brought the tournament into the television age and the sustained excellence of Jack Nicklaus helped to further the prestige of the tournament. Nearly two full decades of European dominance of the Masters heralded the international age of golf. Then Tiger Woods came along and used the Augusta stage for his coming-out party in 1997 and then for his epic comeback in 2019. In Barrett’s telling, each year has its own story to tell as the Augusta National course provides the perfect setting for tournament excitement, noted for suspenseful back-and-forth action between multiple contenders -— the norm at the Masters. The nature of the course’s layout creates opportunities for stirring charges and heroic shots to determine the champion, while filled with enough danger to provoke monumental collapses that also become part of Masters lore. Through the decades, the game’s greatest players have shined their brightest at the Masters. Many golfing careers have been shaped and defined by this tournament, and Barrett shares unknown and forgotten stories of not only the sport’s stars, but also the many others who challenged them over the years at Augusta.